the evolution of a model : a reminder about the nature of beauty

i saw this video for the first time probably 8-10 months ago, but i find that every once and a while i come back to it. not because of any "woohoo, dove!" feelings, but because it's a reminder that the world presented to us isn't always the whole truth of the matter. the media leaves important parts out. which sometime includes reality. beauty lives in a person, not just on the surface. we can -- and are -- beautiful without being a perfect face or a perfect body. without hours of work -- by appearance artists or virtual artists. the beauty on a billboard isn't what's really beautiful about life. ya feel me? 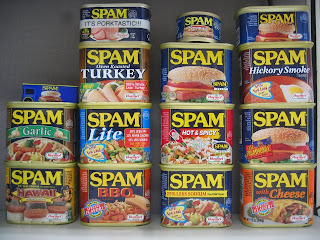 "Spam for you. Spam for me. We'll all live together in Spam harmony." But not in Hawaii...

Apparently Burger King has just added spam to their Hawaiian menu, which is pissing off the folks at McDonald's who've been offering Spam on their breakfast menu since 2002. But the folks in Hawaii eat more Spam than any other state in the Union, so I'm guessing there will be plenty of Spam eaters to satisfy product growth. I mean, these people like it enough that they've got their own flavor: Hawaii. It's not available in general release, so if you want some, you better pack your swimsuit and head to the islands. (However, a Golden Honey Grail version is avaliable in honor of Monty Python's Spamalot. AND, you can play the game online. I know you've always wanted to catapult cows at those Stinky French pigdogs, and now you can!)

But for those of you in the continental U.S. and not likely to make it to Hawaii anytime soon, you can always visit the Spam Museum in Austin (Minnesota, not Texas). Admission is free, and if you're looking for some special treatment, visit the Spam Spa. (They say it doesn't exist, but they provide pictures, so it must be true. Right?!)

With so many great things happening in the word of gelatinous pink meat products, the only thing a girl can say is, "Ahh... Spam culture!"
Posted by Kelly at 8:35 AM No comments:

my wand is packed and ready to go 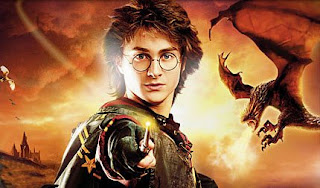 an announcement was made last week that has sent soaring the hearts of some film and literature fans, while causing some critical media researchers to frantically begin ripping their hair out.

Universal Studios announced that they are constructing The Wizarding World of Harry Potter, scheduled to open sometime in late 2009/early 2010. while i am admittedly a happy Potter fan (like millions of others i own all the books (most in hardcover) and have seen all the films), on one hand i'm crazy excited about having the possibility to visit Hogsmeade and Howgarts. can you even imagine Diagon Alley?! but on the other hand, what's the pricetag? (Universal Studio's didn't set a cost yet.)

that's the thing about marketing kid's culture: it always comes with a hefty pricetag. already you can get harry potter anything, for a price. Legos: Graveyard Duel $29.99. a Harry Potter collectible doll: $159.99. an artistic print of the enchanted car: $199.99. you know. cheap stuff. maybe i'm a fuddy-duddy, but this is where i get nervous. where's the boundary between "educational, imaginative goodness" and "let's exploit kids' desire to 'connect' with their literary buddy - for a fee"? hmm...

and that's not even touching on the stir around harry potter's portrayal of gender roles. (there's actually a chapter concerning just that in the 2nd edition of Kinderculture: The Corporate Construction of Childhood. dude, i'm a dork; this is what i study.) personally, i don't really have an issue with harry being harry and not harriette. besides, hermione's a brazen vixen; wouldn't ya say?

Hillary's attempt at being a regular everyday woman...

so, did you see that Hillary is now at Round 2 of her little "get the public involved in my campaign" shenanigans? (if you missed Round 1...)

while she still doesn't have a song, who wouldn't want to hear the Smash Mouth version of "I'm a Believer" every time Hillary speaks?! (and what's so wrong with the original Monkees version? no Shrek connotations to go along with it?) anyway, i'm glad to see "Ready to Run" got the boot. (why did her campaign staff think a song 'bout running away from relationships was a GOOD idea for a campaign jingle. oh yeah, the title...)

but more importantly, why is this even an issue? getting the public "involved" like this is a sick watering down of what democracy is supposed to be. way to go for picking a non-issue, "safe" way to get press coverage. it's brilliant. too bad it makes me sick. (in addition to the fact that Hillary seems to have no comedic sense, let alone timing. who wrote her script anyway? i assume it's supposed to be funny, but why do i get a gross saccharine feeling when i watch? ewww...)
Posted by Kelly at 3:16 PM No comments:

hey, hey! so, i've realized as of late that i tend to gather a lot of random, and at least mildly interesting, thoughts in my head - oddly obscure stuff about this, that or the other. stuff i've seen, heard, bumped into. that sort of general life serendipity. and what do i do with it all? put it in a little digital note to myself that sits in near oblivion most likely forever.

well, i ain't doin' it anymore. (nice grammar, eh? whoo!) i was working last night on what will be part of a final project for my poly-sci class this quarter. (it's a blog called Consuming Knowledge in which i'm trying to gather together a lot of the resources about resistance towards increased commercialism and privatization in education.) anyway, while that site is taking it's time getting off the ground (it's a school project; i'm all anal about getting it 'right'), i keep thinking "ooh! i wanna post ____! that'd be rad!" (yes, RAD. give a girl a break.) and thus the solution - a menagerie of curious thoughts.

i think the world is a curious place. but don't take my word for it...