why Unilever isn't so squeaky clean

Hey y'all. It's been a bit. I hope the new year is bringing good things your way. As for me, I've had a bit of a bee in my bonnet as of late (honestly, when do I not?). So, back in June I shared a short digital video I really dig -- Dove's 'Evolution.' (It looks like the original link is outdated. Here's where you can check out the video.) As part of their Campaign for Real Beauty, Dove released a follow up video a little while back entitled 'Onslaught.' Here it is:

Essentially the film highlights (subliminal-speed style) the advertising industry's common portrayal of women -- a highly sexualized version of womanhood -- and they close with the message “Talk to your daughter before the beauty industry does.” Rock on, right?

In and of itself, yeah, maybe. But, here's the part that gets my goat (not that I have a goat to be gotten, but for the sake of literary flow...): Dove's parent company is Unilever who, as we'll get to, seems to have some conflicting intentions. In describing the Dove brand, Unilever say things like:


In a world of hype and stereotypes, Dove provides a refreshingly real alternative for women who recognise that beauty comes in all shapes and sizes.


Our ground-breaking campaign for our new Dove Firming lotion, which features women of all shapes and sizes, ... underlines our commitment to breaking down stereotypes and enabling you to celebrate your beauty.

Yay! A brand that cares about me as a REAL woman -= no supermodel, no 100 pound, flawless youth decadently pretending the world is mine because of the body I've got to master it with. A company that believes women are more than boobs and asses. Finally. Woohoo! Raise a flag, do a dance, sing a song, and for the love of all that is good, buy Dove! Right? Perhaps not...

Unilevel is parent to a large number of brands, including Slimfast, Bertolli, Pond's, Country Crock, Hellman's, Knorr, Sunsilk, Vaseline, and Axe. You know Axe, right? It's the world's most popular brand of male grooming products (sold as Lynx in the UK, Ireland and Australia). On the Axe website, they describe the 'work' of their brand as follows:


The Axe Effect is the internationally recognized name for the increased attention Axe-wearing males receive from eager, and attractive, female pursuers. Regardless of where you live (shout-outs to Cindy and Diane in Dawson City, Yukon!) you can "get you some" Axe Effect by going to a store near you and purchasing one of our fine products.

And on Unilever's Axe brand site, they say,


With its coolly seductive fragrances and packaging, the brand has established itself as the world's top male grooming brand by coming up with a constant stream of new ideas to keep guys a step ahead in the mating game.

Um, uh, what? Axe is body spray (and other products for men) to help the male members of our species get a little leg up on the "mating game." You got that "get you some" innuendo, right? Yeah. Thought so. Hard to miss. Axe is a brand that's sole purpose is to help men get into girl's pants. Awesome. I feel so clean and wholesome now. And a bit objectified. Just a bit.

And, just to stress the point, if you visit the Axe website, you get an even clearer image of their view of women. After you get through Flash loading, oh, excuse me, I mean "Your mojo is loading," you have a couple options. You can watch a video about The Axe Vice Naughty to Nice Program designed to 'rehabilitate' all those unfortunate sweet women who have fallen victim to the irresistible lure of Axe products and as a result committed crimes. (It's the 'good girl gone bad' scenario, 'cuz really, does anyone want a bad girl who's already been bad? Seems not.) You can watch The World's Dirtiest Film. (I'm sure you get it. What more do I need to explain about that?) You can play the Dirty Rolling game to see 'how much dirty fun you can get into.' Mind you, if your digital giggling self and lip-locked partner roll over women to join your rolling trout in the mud you get bonus points. If you roll over men, you lose points. We only want one guy per dirty game, apparently. Or, and this may be my 'favorite,' you can download a "Long Lasting Axe V.I.X.E.N.S." (Very Interactive Xtremely Entertaining Naughty Supermodel) for your online pleasure. Is it fair for me to say yet that I hate these people?

(Okay, and for my own satisfaction, I also have to highlight that Unilever introduces Axe saying, "In the film The Matrix, Keanu Reeves is given two choices. He can either take a blue pill and wake up in the morning as if nothing has happened or pop a red pill and enter the unpredictable 'wonderland' of the Matrix. As millions of guys around the world know, Axe has taken the red pill." Just so we all know, The Matrix was inspired in part by a book written by Jean Baudrillard called Simulacra and Simulation. Simulacra and Simulation, like Baudrillard's other works, is a critique of contemporary consumer society, suggesting that our obsession with material things and the societal meanings we ascribe them (example: body spray makes you irresistibly sexy) leads to our own apathy, nihilism, and eventual destruction. We live in a world of constructed lies -- false images obscuring the truths of our existence. Essentially, everything we come to believe is in a falsehood. In The Matrix, Neo's acceptance of the red pill doesn't take him to a 'wonderland' where deodorant makes him every woman's sex dream; it takes him to a reality stripped of the images we place upon it -- exactly the opposite of the result Axe suggests. Just needed to point that out. Yeah, I'm a nerd. And I'm cool with that.)

And, just to make it more fun, Axe has fronted this 'band' called The BomChickaWahwahs who taut themselves as "the world's naughtiest band." And who are they? Well, a group of four lingerie-clad Axe minions whose theme song (uh, only song?) includes the lyrical anthem:


Bom chicka wah wah. It’s the labido’s mantra.
Yeah it goes bom chicka wah wah. Mmm, baby come to mama.
The scent goes up through the nose and then into the brain
Attacks the common sense, whose always super lame...
It invades a woman’s mind. Her limbic region goes insane.
She’ll start aching for a man and acting so profane.
It’s a sexual turrets. Strange words break out your mouth.
We’re here to warn all you girls: there’s a monsoon headed south. ...
How to explain this sensual feeling,
Somehow my panties end up on the ceiling.
Even guys we cannot stand have us eating from their hands. ...
Bom chicka wah wah... 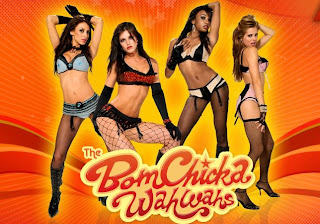 (There is also a music video, which I can't quite bring myself to post here, but if you want to see it, go here. It's also on the band's website.)

Have I highlighted enough examples yet to demonstrate the demeaning way women are portrayed by the Axe brand? So, then how do we (you, me, whoever cares) reconcile the reality that Unilever actively promotes Dove, a brand claiming a desire to break from the traditional messages of women as sexual objects and promote a more realistic view of women, while also pushing Axe, a brand centrally grounded in the promotion of women as sex-objects to be mastered/owned/conquered (whatever language you prefer) through the purchase of products? (This is the stuff that keeps me up at night, folks. Seriously.)

So, what do we do about it? Do we deny the value of Dove's messages? Well, no. If they impact positive growth or change, I wouldn't deny them that power, nor would I want to. But, recognizing the purpose-serving motives of advertisers is important as well. Unilever, through Dove, promotes 'real' women as a marketing ploy, just as Unilever, through Axe, promotes women as sex-objects as a marketing ploy. They create the same material they warn us to save our daughters from. Unilever's mission says


Our mission is to add Vitality to life. We meet everyday needs for nutrition, hygiene and personal care with brands that help people look good, feel good and get more out of life.

And regardless how it is framed, the company's purpose is to stay in business, to make money. And apparently it doesn't matter whether you do that by portraying me as a 'real' woman or as a sex object. Whatever sells. And it's too bad, really, because I've got this soft spot for companies that are interested in serving real people, not the almighty dollar. And my cash follows my interest.

P.S. - If you'd like to do something about Unilever's hypocrisy, one option is to join a letter writing campaign being led by the Campaign for a Commercial-Free Childhood. You can encourage Unilever to consider the mixed messages they endorse in their expressions of concern for girls' and women's well-being while also positioning women as sexual objects.
Posted by Kelly at 1:42 AM No comments: