Maps as provocateurs of social discourse (aka - Maps are AWESOME!)

It’s been buzzing around the internet the last little while, but have you seen the work of Bill Rankin?  He’s a historian and cartographer, and the curator/developer/mastermind behind Radical Cartography.

He does all sorts of map-making that intentionally pushes the boundaries of how folks think about maps as information organizers, transmitters, and social tools.  For example, his 2005 map called "Suicide" shows the difference in rates of suicide by white men and white women geographically in the U.S. (you might be surprised), and his 2006 map "U.S. Economic Empire" shows the percent of nations' GDP that was exported to the U.S. in 2003.

But what seems to have gained the most attention recently are his 2009 "Chicago Boundaries" maps, one which maps race/ethnicity in the city limits and the other which maps income in the same area.  Here's what he says:


“Any city-dweller knows that most neighborhoods don't have stark boundaries. Yet on maps, neighborhoods are almost always drawn as perfectly bounded areas, miniature territorial states of ethnicity or class. This is especially true for Chicago, where the delimitation of Chicago's official “community areas” in the 1920s was one of the hallmarks of the famous Chicago School of urban sociology. And maps showing perfectly homogeneous neighborhoods are still published today, in both popular and academic contexts alike.

My alternative is to use dot mapping to show three kinds of urban transitions. First, there are indeed areas where changes take place at very precise boundaries — such as between Lawndale and the Little Village, or Austin and Oak Park — and Chicago has more of these stark borders than most cities in the world. But transitions also take place through gradients and gaps as well, especially in the northwest and southeast. Using graphic conventions which allow these other possibilities to appear takes much more data, and requires more nuance in the way we talk about urban geography, but a cartography without boundaries can also make simplistic policy or urban design more difficult — in a good way.”

Long and short, he used city-block level data from the 2000 U.S. Census (rather than 'neighborhood' data) to map race/ethnicity (using the categories stipulated in the Census).  Every color-coded dot represents 25 people.  A pink dot represents 25 White people.  A blue dot reps 25 Black people.  Asians are shown in green, Hispanics (again, the language of the Census) are in orange, and "Others" are in gray.  The result:  whatever people might suggest to the contrary, segregation very much continues to exist in Chicago my friends.  (In case you had any doubt.)

But the visual is stunning – both for showing levels of racial integration (or its lack) and population density. 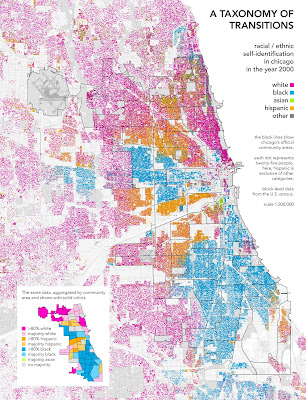 Running with Rankin's idea, Eric Fischer used the same technique to map over 100 U.S. cities.  (And he just posted up the results less than a month ago.)  The results are amazing to look at, in addition to being amazingly informative.  Plus, being on Flickr, the images have numerous tags to help readers identify neighborhoods, landmarks, and so forth.  And, as readers look through, some are also commenting on the many ways history impacts population divisions -- such as the effects of redlining in Detroit and the geographic boundary of the Pima Maricopa Indian Reservation just east of Phoenix.

Go check it out.  It’ll give you something to think about.

Have I mentioned lately how much I love maps?!

UPDATE (November 2010):  It recently came to my attention that Bill Rankin is the downstairs housemate of my good friend and old roomie Sarita.  Imagine that.  Small world, eh?! - November 2010

UPDATE (July 29, 2011):  Bill Rankin recently posted a short (5 minute) video explaining his map of Chicago.  It's super interesting and totally worth watching.  Here it is: