I *heart* Jon Stewart. Plus, I'm not gonna drop-kick Muslims just because you do.

I caught Jon Stewart's opening monologue last night and I think he totally nailed it.


I wish folks would take the time to really learn a bit more about Islam (and from the source, not second-hand from idiots like FOX News) and spend some time thinking about the many ways Christianity is privileged in our "separation of church and state" society. I'm not saying anyone needs to 'turn Muslim' but a little open-minded willingness to ask sincere questions, listen honestly, and reflect humbly could do us all a world of good.

And, getting off my soap box, one of my favorite lines from Stewart's monologue was this:

FOX Newscaster: "There are a number of people asking, 'Why are these mosques being built in my community?'"
Jon Stewart: "Oh! Oh! Oh! I, I think I know the answer to this one! There are Muslims in your community. And they can't find a prayer rug room in the church or synagogue."

Indeed.
Posted by Kelly at 9:26 PM No comments:

"The State of Play in Chicago's Communities" is published and ready for your reading pleasure! 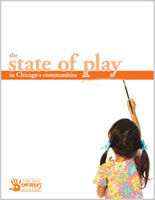 Through my work at Chicago Children's Museum I spent roughly five days a week last April and May (2009) documenting and helping to facilitate workshops for parents and professional development trainings for educators about the connections between play and learning. Our 'Communities at Play' team (or CAP, as we called it) set up short-term residencies in Chicago Park District buildings located in four Chicago neighborhoods -- Englewood, Humboldt Park, Pilsen, and Rogers Park -- and listened to what people had to say about play, its value, and the barriers they face in supporting children's play in their communities.

Then I spent from June to October (2009) analyzing all the data we had collected, merging it with data from online surveys the Museum had conducted between October 2008 and April 2009, and drafting the first version of what would become the "The State of Play in Chicago's Communities" report. After MONTHS of revisions and delays within the Museum, the final report is now available to the public. Yippee!

In some ways the final report is markedly different from what I originally wrote and I mourn portions that were taken out and language that was removed by editors who had the final say, but much of the report's core remains the same. If you would like to read the report, you can find it here (pdf). Also, all of the photographs of adults in the report were taken by me (as are the photos in this post).

CAP team and participants is finally available to the world. Go read the report!
Posted by Kelly at 5:32 PM No comments: