Let's round out the month with a shout out to spoken word with a side dish of feminism.

I think Rafael Casal is the shit. His flow is sick, and his message critical. (And there I go again cross-breeding two language sets that are too often kept in separate corners.) Rafael's a talented young voice that gives thoughtful, heart-felt attention to very real issues through the fresh eyes of a generation seeking their (our) way in a mixed up world. He just came out with a hip-hop/rap LP – "As Good As Your Word" – at the end of January. And if you want to read "Barbie & Ken 101" in its final form (the piece was only about a week old in the vid) go here.

the end of an era: say farwell to tortilla chips... 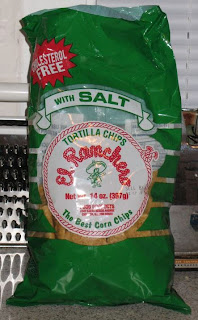 Okay, so I'm supposed to be finishing my last final of the quarter. (Thank God, but I'm not done yet, so cross your fingers.) But, I need a momentary pause to go on a tirade.

It's a little after midnight and I just opened a brand new bag of my favorite, locally manufactured tortilla chips. Yummy, yummy, right? Well, I am an obsessive nutrition facts label reader. (It's sick, I know.) But, my favorite thing about these chips, besides their oh-so-yummy taste, is that they are made with only three simple ingredients: corn, lime, and corn oil. Woohoo for simplicity! So, tonight I'm munching away and habitually start to read (uh... reread) the label and to my surprise, there is a new ingredient I've never seen before: "tHBQ as an oil additive." What on earth?!?! So, I hop on the internet and do a little research, only for my dismay, disdain, and general sadness to grow in sickly measures.

tBHQ, or tertiary butylhydroquinone, is a petroleum-based food additive being used to replace partially hydrogenated this, that, and the others which are known for their contribution to high trans fat numbers (also yucky). The glorious thing about tBHQ is that numerous studies have linked it to bladder and kidney cancers and it’s been used to predictably induce tumors in test animals. And, just as an added bonus, it's a member of the same family as BHA and BHT, both of which have been banned in England, because they have been proven to be carcinogenic. I am totally lucking out here. And the FDA lets them put this shit in my food!


According to A Consumer's Dictionary of Food Additives, "tBHQ is a form of butane (i.e. lighter fluid) the FDA allows processors to use sparingly in our food... which is probably just as well, considering that ingesting a single gram of tBHQ can cause 'nausea, vomiting, ringing in the ears, delirium, a sense of suffocation, and collapse.' Ingesting five grams of tBHQ can kill."

(from An Omnivore's Dilemma by Michael Pollan)

So, my delightful tortilla chips, once prized so highly for their natural ingredients, could now contribute to my getting cancer and/or tumors. So excited about that.

And thus, I must now bid farewell to my favorite tortilla chips (seriously the best I've had in my whole life), write a nasty letter to the company (El Ranchero Food Products/2547 S. Kedzie Ave./Chicago, IL 60623), and seek simpler times, when a girl could count on corn, lime, and corn oil to be all she needed. I am so disappointed...
Posted by Kelly at 1:14 AM No comments:

March is Women's History Month, so as a little shout-out to my fellow sisters, I wanted to post up a video tied to a relevant women's issue (so many to choose between). (And, really, women's issues are everybody's issues. Just as a reminder.) So, I'm posting a video that just came out in January celebrating the 35th anniversary of Roe v. Wade, which was decided in January of 1973 (NOT all that long ago, really). With all the political talk intent on overturning Roe v. Wade today, it should be apparent the controversy and relevance this issue still holds. Put together by Naral Pro-Choice America this video speaks to the complexity of real women's lives. Women's decisions concerning choice are anything but simple and emotionless, and the video does a nice job of placing that complicated reality in the social, historical context of our world. As a woman, I want to know that my actions, my body, and my reproductive rights are MY choice, not the decision of lawmakers who know nothing about my life, my journey, or my needs. It is my responsibility to protect that right for myself, my friends, and my loved ones.

(And if you're interested in Faith Pennick's film, which is mentioned in the video, go here.)
Posted by Kelly at 5:43 PM No comments: